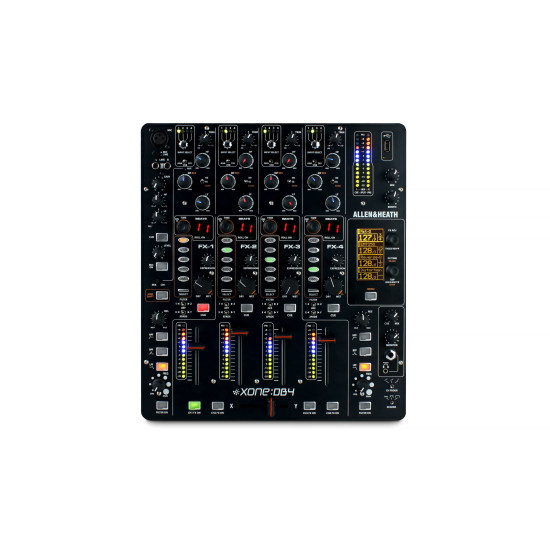 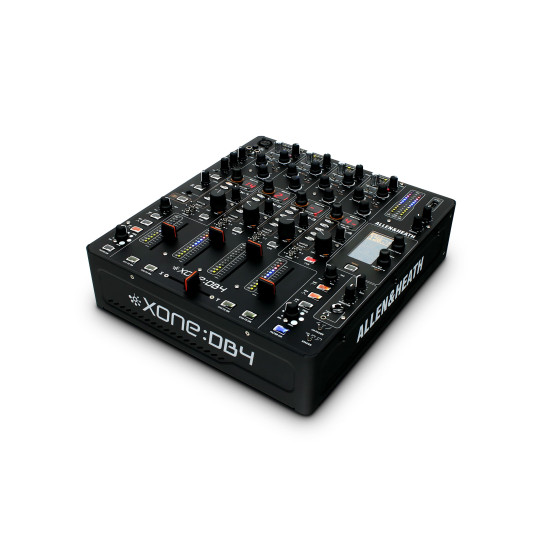 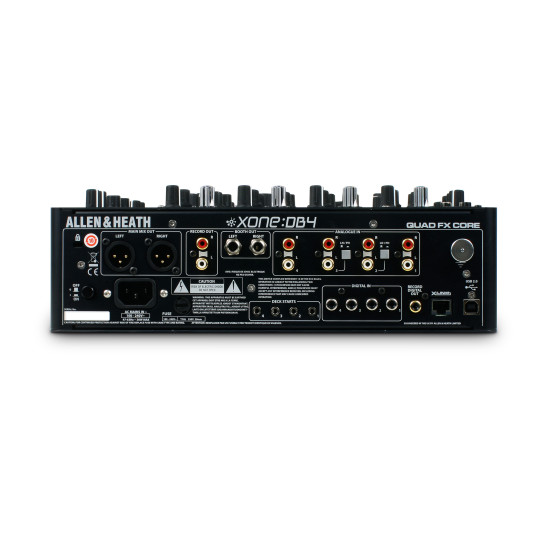 The Xone:DB4 is a truly ground-breaking mixer and by far the most advanced product that we have designed. Every feature has been meticulously researched with a view to offering DJs ultimate creativity.

Based on the iLive pro-touring FX system, we developed FX algorithms with BPM conscious parameters and tight spectral control, customised to perfectly fit the DJ environment. As the loops and FX are automatically synchronised to the tempo of the track, it is very easy to build some amazing grooves and soundscapes without problems of latency, low fidelity and the general hassle often associated with using software and laptops.

The icing on the cake is the flexible input matrix, where any audio source can be selected on any or all of the channels. Different processing can be applied to the same track on separate channels and you can fade between them, or a phrase sampled in the looper of one channel can be added to the mix later in the track. Our digital design team has done an incredible job to ensure that this is one of the most innovative and exciting DJ mix tools to date.

Quad FX Core
The heart of the Xone:DB4 is the powerful Quad FX Core DSP engine, enabling each channel to have its own FX bank and BPM detection system, which automatically adjusts all time-related FX and loops to the tempo of the music. There are 5 studio quality FX types optimised for DJ use - delays, reverbs, modulators, resonators and damage – plus each FX type has a patch library of different effect variations. Each FX bank has a dedicated expression control and a rotary pot to set the wet/dry level, whilst further tweaking can be performed using the global controllers in the FX master section.

Looper
Each channel has a built-in looper, with selectable loop length from 1/16 beat to 4 bars. :DB4 will always record the full 4 bars, so the loop can be expanded or shrunk at will.

Source select
Each music channel can select any of the available stereo music sources: Analogue Line 1-4 (switchable to Phono on 2-3), Digital 1-4 or USB 1-4.

EQ / Filter
Each music channel has a 3-band EQ that can be configured as standard asymmetric EQ (+6/-25dB), Isolator (+6dB/OFF with a 24dB/octave slope), or reconfigured as a High-Pass/Low-Pass filter system with adjustable resonance. EQ knob pointers change colour to show which type of equalization is active.

Mic/Line Input
The Mic/Line input has 2-band EQ, gain, cue and mix level. This can also be routed to channel 1 for adding FX.

USB
User-defined settings such as meter mode, BPM range, USB audio routing scheme and display brightness can be saved to a USB key for recall on another :DB4.

High Visibility Display
The OLED display is clearly visible, even in bright sunlight, and displays channel FX selection and current BPM, as well as being an easy interface for the Menu setup functions. 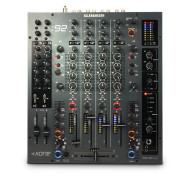 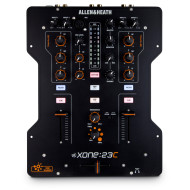 Allen and Heath Xone:23C Mixer
High Performance DJ Mixer and Soundcard The Xone:23C brings together the best of digital DJing and conventional mixing in a compact accessible for..
$449.00
Add to Cart
Add to Wish List Compare this Product
Buy Now Question