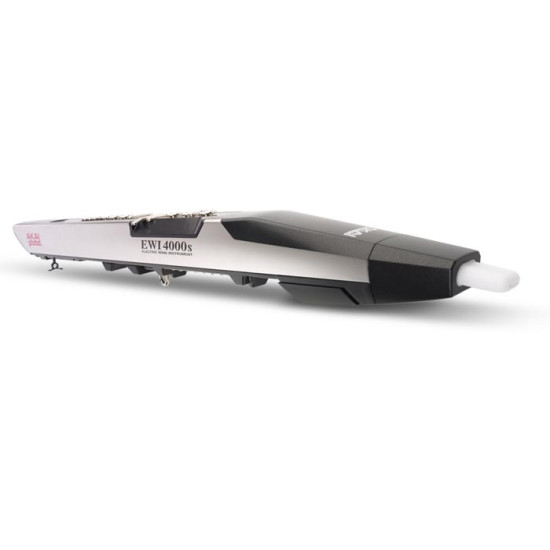 The EWI4000S has several improvements to the design, such as having a built-in sound module, direct MIDI IN and Out, and other updated operating functions. These functions make playing the EWI4000 easier than any other electronic wind instrument.

With the sound module and the instrument all in one product, players no longer need to be tethered to a module. By using MIDI and audio wireless transceivers, EWI4000S players can move freely on the stage as they are playing. The user can easily switch between programs on the EWI4000S directly with a dedicated Program selection button, or use the note keys to select stored patches.

The internal sounds of the EWI4000S are based on a virtual analog synth sound module that is very responsive to the player’s nuance. With easily accessible controls for breath, vibrato, glide time, and bend width, users can adjust the settings of the EWI4000 to their specific playing style. Also you can send multiple MIDI messages via breath control to send expression and aftertouch control messages.

The EWI4000S also offers some new performance control features as well, such as the Octave Key. When you activate the Octave mode, you will get an automatic doubling of notes at one octave below the note you are playing. There is also a Hold Mode, which holds a note that you select enabling you to solo around that note. This is the first EWI with a sostenuto capability!

Besides being a great wind controller, you also get a first rate synthesizer. The EWI4000S has new synthesis features which were not available on previous EWI’s. The internal analog modeling synth has two voltage controlled oscillators (sawtooth, triangle, square with pulse width waveforms) with individual volume control. The voltage controlled filter has a feature which allows you to change from 2 to 4 pole filters. The EWI4000S's new noise generator and a dedicated VCF add more realism to your playing, emulating breath noise. The EWI4000S has a new sweep function, which works more effectively than a typical envelope generator. As you change the force of your playing the sweep parameter will alter the shape of the sound. The synth contained inside has a LFO (low frequency oscillator) specifically for the voltage controller filter modulation. This LFO affects vibrato as you use the bite sensor. The EWI4000 also has built-in effects, a first for Akai EWI products, such as Reverb, Chorus and Delay to thicken or double-up your solos.

The EWI4000S will come with a computer editor program that allows users to customize all their sounds ahead of time for live performance. This editor will come standard for Windows and Mac computers. All of your edited Programs can be stored inside the EWI4000S so you can recall your settings instantly during your performance.